apparently you can dance anywhere

Song starts at 1:10 into the video…  Hope the video gets you smiling today!

Today’s art, musical, & relationship spark all rolled into one:

May 8, 2010: “Comprising my mother’s voice and the sounds of her garden, this video is my first Pogo mix of the real world. I hope I’ve done my mother justice in capturing her passion. Enjoy!” (YouTube)

If you haven’t already seen the film “Up,” I highly recommend that you do so. 🙂

“Up” is a heartwarming and hilarious Disney Pixar film; a cartoon yes, but adults will get a lot out of it, too.

Charles Muntz: Adventure is out there!

(Indeed, adventure is out there for us to find.)

Carl Fredricksen: Hey, let’s play a game. It’s called “see who can be quiet the longest.”
Russell: Cool! My mom loves that game!

(I played a version of this game with my sister when we were young.)

(If you have a dog or ever seen a dog with a cone, you’ll know why this is super-funny, particularly his tone of voice in the film.) 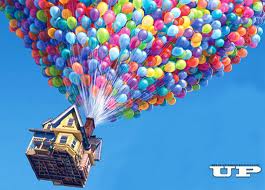 Here’s some great electronic music based on “Up,” too: